Nick Kovacevich is the Co-founder, Chairman, and CEO of KushCo Holdings, a publicly-traded company providing ancillary products and services to businesses operating in various industries, including legal cannabis and CBD. 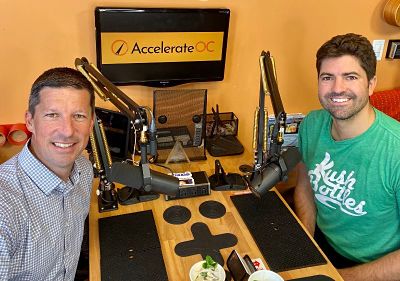 It was formerly known as Kush Bottles.

Nick became CEO 5 years ago and has grown the business dramatically – from under $2M to nearly $150M in sales and the team from less than 12 to more than 250 people, as well as diversified the business into five categories and operations in multiple states and countries.  For a non-tech company, that is still tech company growth rates!

Prior to KushCo, he helped co-found another successful company here, BigRentz, a leader in online commercial equipment rental. He remains on their board today. He also has a number of other business holdings.

He was captain of his college basketball team at Southwest Baptist University. He was also a great student there, graduating with high distinction.

Like prior guests at Accelerate OC, perhaps he was born an entrepreneur. He had his first business shortly after college, joining a friend (and now longtime business partner) in one called Pack My Dorm, which they successfully sold in 2010.

With KushCo, Nick has become an expert on the cannabis industry, and he speaks and writes about it often in mainstream media and at events.

Nick and his team have a front row seat in the evolving and fast-growing cannabis industry. No matter how you feel about it, it's an exciting and dynamic industry with a lot of change in it.