Don DiCostanzo has a really cool current company, Pedego, which is also his passion. 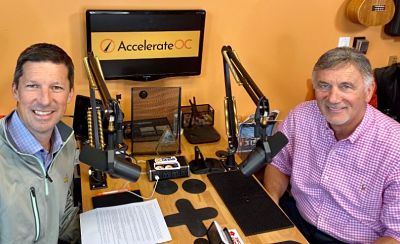 That's clear in how he talks about it.

Don is the co-founder and CEO of Pedego® Electric Bikes, the number 1 electric bike brand in the United States, according to Navigant Research. They are sold at more than 100 Pedego-branded stores in the United States, plus in Canada and Europe. The bikes have electric motors that help riders over hills and through headwinds, and traveling up to 60 miles on a single battery charge.

The company was founded here in 2008. You'll love their tagline - “Hello, Fun!” And you’ll love the many celebrities on his website who have and love his bikes.

Don is a serial entrepreneur – he founded and invested in another company, bringpro in 2014; he also has another company in the equestrian space with his daughter. Before that he was the CEO of Zak Products and worked with auto dealers for over 5 years, and he was the president of Wynn Oil Company, an 80 year old company in the automotive industry.

Don's energy and enthusiasm are infectious - he's a great cheerleader for Orange County and an inspiration to other entrepreneurs and aspiring ones here.