Nick Smoot discussed his amazing initiative, Innovation Collective (IC), the education and human development company he started and is expanding to communities around the country. 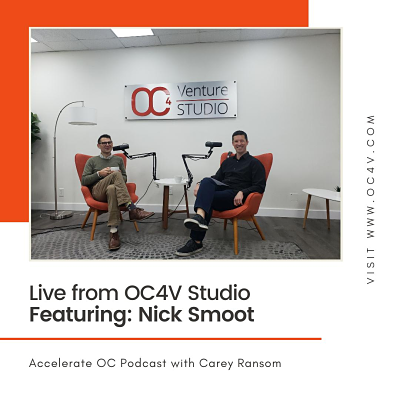 It was done in front of a live audience of some of OC's most active and committed innovation community builders and everyone came away inspired.
About IC: Their work is driven by a belief that human potential is underactivated and through community they can inspire and cultivate innovation. It is a culture of innovation, perpetuated through connection, support and confidence, that turns ideas into reality and changes lives.
As experts in inclusive innovation community activation and placemaking, their goals are to:
The Backstory: IC was founded by community organizer and serial entrepreneur Nick Smoot. Nick has a lifetime of experience developing community having begun his leadership activities at 10 years old organizing mentorship programs for underprivileged 5 and 6 y/o children in the social work system.
This work continued with Nick developing mentorship programs, delivering training to thousands of high school and middle school students, implementing global leadership training, and working with NGO’s taking him across the world by the age of 21.

In his mid twenties, Nick began consulting work with for-profit investors using the human centered design thinking he developed to work with teens.

This model applied seamlessly to development of corporations and lead to him co-founding and selling three mobile tech startups. During this period of his twenties and early thirties, Nick was part of the startup scene in Philadelphia, Manhattan, San Francisco, and Los Angeles.

In 2011, when living in Los Angeles, Nick began speaking at the early “Silicon Beach” events and was invited by the economic think tank The Milken Institute to become one of the 300 global Young Leaders who gather privately to address and improve job creation, access to capital, and accelerating medical cures around the world.

This invitation to join the institute coincided with the Occupy Movement. Growing up in small town America in a middle class family and working with disadvantaged youth was an odd backdrop to the two contrasting worlds of “haves and have nots” facing him in Los Angeles. This dichotomy was a very sobering situation for him. Through the institute, he was in presentations with heads of state and the largest private equity firms in the world while, outside the doors, picketers were ensuring their messages were heard.

This scenario launched him into strategizing a process that has become the Innovation Collective; a grass roots system of events and mentorship that inspire and mobilize all citizens to become lifelong learners and highly motivated innovators.

This system and mentorship has repeatedly surfaced highly valuable talent and intellectual property.

It has proven to be a powerful mix of corporate social responsibility and corporate development.

His model and experience has most importantly lead him to over 70 small communities across the United States and has been tested in China, France, Canada, and Aruba. The work has won national awards for economic development, unrestricted grants from the former CEO and Chairman of Google, and has engaged leaders and mentors from IBM, Google, SpaceX, Facebook, Boeing, Walmart, Apple, and others to do good and do well.

Nick’s background in community activation, inclusive innovation, government policy, tech investment, and startup culture has uniquely positioned him to be someone with authentic and practical insights that create an economy aware of the past, but ready for the future.