Spencer Rascoff and Carey had a lively conversation about many of the exciting things happening in the LA and Southern California startup community. 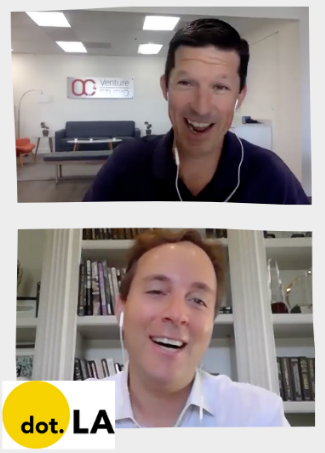 Spencer has fully immersed himself here and is helping to build it as the next global innovation center.

They discussed the many advantages we have here, such as diversity of economy, creativity in abundance, and quality of life that is second to none.

He has done a lot so far in his career. He has co-founded two businesses that became household names, Zillow and Hotwire. And earlier this year he launched his latest company, dot.LA, a media company dedicated to covering and connecting L.A.’s startup world.

Spencer co-founded Zillow in 2005, had several roles, including CEO for nearly 10 years and took them public. He also led them through 15 acquisitions. He co-wrote a best-selling book while he was there, and led a company where people loved to work, as they were often awarded for it and their culture. He also co-founded Hotwire.com and we all know that jingle. He and his team sold it to Expedia in 2003. Prior to that he worked in private equity and investment banking. He’s lived several lives!

Spencer relocated back to LA a few years ago, after many years away. We're excited that he’s back here to share his wealth of experience in building world class and industry shaping technology companies. When you build a company that gets a single letter ticker symbol, Z, and reaches $10B market cap, people should listen. It will be fun to work with Spencer and the dot.LA team to highlight exciting developments and people here.