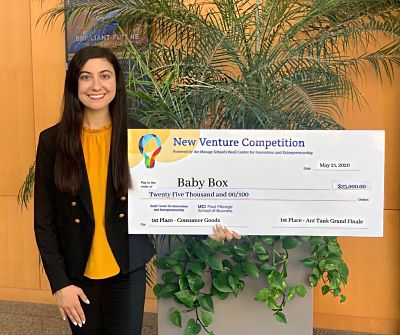 The competition is open to all of Orange County including UCI students, professors and researchers. Participants ranged from a wide variety of backgrounds.

The 15th annual New Venture Competition had a whopping 114 entries this year with three competitive rounds ending with the Grand Finale Ant Tank. Founder Zarina Bahadur’s effort placed 1st in both the consumer products track as well as the finals.

“To be the grand prize winner and place first in both semifinals and finals was astonishing. I am honored to have competed alongside many brilliant people with very promising startups.  The competition was an arduous process so to know that the judges picked my startup validates my company and solidifies that I’m on the right path to success. I feel very happy and proud to have accomplished something of this magnitude, especially in today’s current climate.”

Bahadur’s company, Baby Box, is a subscription-based service powered by artificial intelligence for parents of children 0-3.

The company is in its early stages but has already gained much traction in so very little time. Bahadur is the founder and CEO and runs the company while going to graduate school full time.

Bahadur is a graduate student at the top ranked Paul Merage School of Business at UCI where she received a full ride scholarship to the program. By obtaining her master’s in business, Bahadur has learned the necessary skills to build and scale a small idea into a major company while also gaining the connections and network of Orange County to help her succeed. She is also the very first student in the whole program to win the New Venture Competition.

“To be a part of this thriving ecosystem is very rewarding. We’re cultivating an environment for innovation and entrepreneurship here in Orange County and I’m thankful to be a part of it.”