John Dearie joined Carey to discuss the critical need for more entrepreneurs in our country, to drive forward more economic growth, innovation and jobs in our country.

He is currently the President at the Center for American Entrepreneurship in Washington, DC. 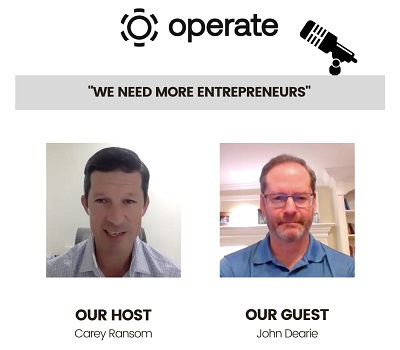 John founded this organization in 2017 as a nonpartisan research, policy, and advocacy organization. CAE’s mission is to engage policymakers in Washington, and at state and local levels, regarding the critical importance of entrepreneurs and start-ups to innovation, economic growth, and job creation – and significantly improve new business formation, survival, and growth.

John has studied the history of how economic development, job and innovation growth, and entrepreneurship has evolved in our country, and has pulled together an amazing group from across the country to advise CAE in its efforts.  We now have the first ever caucuses in both houses of Congress on the topic of Entrepreneurship, which has led to much more energy around new key pieces of legislation to spur more entrepreneurship and innovation.

Prior to CAE,  John was the CEO of Financial Services Forum, a policy organization formed by the CEOs of the largest US financial institutions.  He also was at the Federal Reserve Bank in NY for almost 10 years, including several years as an officer of the bank.

John and Carey hadn't discussed it previously, but John attended a rival school in Indiana, Notre Dame.  In fact they often don’t claim Indiana as their location.  Thankfully we don’t play them in football – but we usually have our way with them in hoops.

This conversation is important to everyone in this country as we look ahead to the profound changes in our economy in coming years, and how we create more prosperity and opportunity for as many people as possible.