Ben Kuo has been a fixture as an evangelist for startups and innovation in Southern California for many years. 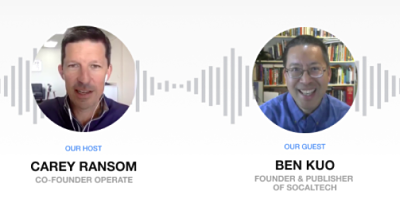 They actually recorded this conversation several months ago, and yet it's almost timeless, as the challenges they face in business, in startups and in the ecosystem largely persist.

Carey considers Ben the tip of the spear for startup, tech and investor news in the region, and remembers him as one of the first folks he met in the community when he arrived back in the early 2000s.

Before focusing on SOCALTECH, Ben was a product manager and engineer for Troika Networks, which was in storage area networks.  He also started and sold a website RealEats.com for restaurant reviews, well before Yelp!

Thanks to Ben Kuo for many years of support for Southern California entrepreneurship!

And, thanks to the Operate Podcast for another interesting episode promoting Southern California startups!

Listen to more episodes of the Operate Podcast here.