An article we liked from Thought Leader Norberto Santana Jr. of Voice of OC:

Santana: Local Taxpayers Deserve To Be Heard At Local Public Meetings They Pay For

Local taxpayers should be able to comment at any public meeting they are paying for. 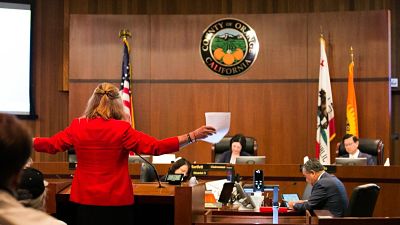 Yet it seems that many Orange County local politicians aren’t too keen on that.

Since the pandemic took hold a year ago, many traditional norms of open government at the County of Orange and the region’s 34 cities have been turned on their head.

Few aspects of local government have been more affected than the ability to publicly speak to your elected officials.

Readers will notice that this national Sunshine Week – a tradition started in 2005 by the American Society of Newspaper Editors to promote open government across the nation – we are publishing under the banner head of the Noise of OC.

Orange County Supervisors’ Chairman Andrew Do gave our newsroom this nickname last month, with the aim of ridiculing our reporters efforts to hold agencies accountable by filing lots of public records requests for source documents that offer unvarnished views of how government policies are being crafted.

In a real boost to the spirit about where Orange County is today, Do’s sentiments drew a strong rebuke, not just from readers and local watchdogs, but from the region’s Press Club, which is hosting a video discussion about local government transparency this coming Thursday.

Yet it’s not just on public records requests where government leaders are refusing to let the sunshine in.

Are People Losing Their Civic Voice?

Increasingly, county and city leaders are cutting the public completely out of the conversation at the weekly city council meeting.

When city council meetings had to go virtual last year as the pandemic shut down most live public meetings, a wide array of practices were triggered and in some cases, like the City of Anaheim, public comment largely disappeared.

Indeed, if you poll the Voice of OC reporters and students that cover the region’s city halls and county agencies, you’ll find a wide array of differences on how the county and cities have adapted to ensure effective public comment is preserved at city council meetings.

Sadly, very few agencies have taken up the opportunity to really marshal resources into increasing people’s ability to virtually interact with their local government, much less opine at city council meetings.

There’s some exceptions to that, according to the reporters, like the cities of Irvine, Santa Ana, Laguna Beach and the Orange County Fairgrounds, some of the bodies that  currently allow people to phone-in, Zoom-in or email-in public comments.

For most of last year, the region’s largest public body – the Orange County Board of Supervisors – didn’t do anything to allow residents to remote comment at meetings despite getting $540 million in federal relief funds.

Indeed, I can’t tell if one penny of that half billion dollars went toward improving remote public comment access to meetings – something definitely related to the pandemic.

We know at least $90 million was spent by the OC Sheriff’s Department, reportedly for impacts to their jail operations.

After the ACLU pressed county officials on expanding public comment last summer, County Counsel Leon Page started reading residents questions/comments that are emailed in prior to the meeting, reading them out loud into the record, which often makes for great listening.

Now, County CEO Frank Kim likes to brag that the OC board of supervisors was one of few bodies that kept meeting in public – and also kept live, in-person public comment going – throughout the entire pandemic.

He usually forgets to mention they all met without masks for most of the pandemic.

Kim – who got Covid himself at work – doesn’t seem to understand the political message sent by not requiring masks or providing remote comment ability to those who might disagree with the board of supervisor priorities.

Indeed, it was only after CalOSHA regulations were cast down from Sacramento around November that county staff and supervisors started wearing masks to meetings.

To date, there’s not been any public discussion on the county supervisors’ dais about how to increase public participation in meetings or get more remote, virtual public comment from interested residents.

None of this is lost on the public.

At the Feb. 9 Orange County supervisors meeting (video link), one man during open public comment identified himself as Hector B and directly expressed his frustration with what CEO Kim sees as a success, of keeping public comment open in a manner that favors people who are not wearing masks. “I’m even terrified to be here in this building – where you all don’t even enforce a mask mandate. I’m scared for my life. I’m just trying to invoke my First Amendment right, and I’m scared because there’s speakers ahead...

Read the rest of this article at voiceofoc.org...

Thanks for this article excerpt and its graphics to Voice of OC.