They’ve made dozens of investments in a bunch of SoCal founders’ companies and have already had many acquisitions, unicorns and even companies go public. 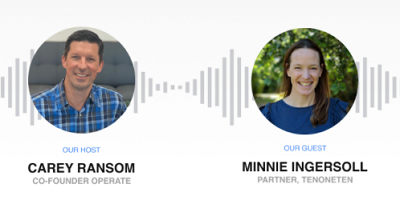 She was previously the co-founder of Shift Technologies, a newly public company that makes buying and selling cars fun, fair, and accessible.

Minnie was also COO of Code for America, and a former commissioner of the City and County of San Francisco. Early in her career she was also in Product at Google.  Minnie grew up in LA, and returned a couple years ago, joined TenOneTen and she’s been all in on LA / SoCal since returning.

She shared her own founder journey, her experience as a camp counselor (you'll like that story), and how she thinks about choosing founders as a venture capitalist, in which she utilizes her extensive hiring manager skills.  There's a lot of gold in here for the entrepreneurs in the audience!

Thanks also to Jeff at Collective Genius for sponsoring the show.  If you want to do Peak Planning for your high performance team, you should meet Jeff!

And, thanks to the Operate Podcast for another interesting episode promoting Southern California startups!

Listen to more episodes of the Operate Podcast here.