How to Shut Down a Startup

An article we liked from Thought Leader Sophia Kunthara on Crunchbase:

Failure Is An Option: How To Unwind An Unsuccessful Startup The Right Way

It was a Friday the 13th when entrepreneurs David M.M. Taffet and Christie Zwahlen realized they would have to put their startup, Petal, on pause. 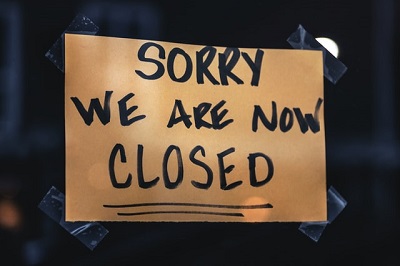 Just six weeks earlier, in October 2020, Petal had finalized pricing for manufacturing its germ-freezing trash can, which consumers could use to get rid of germs in their trash and eliminate odors. Then, the cost of manufacturing the product shot up by 275 percent, due to the COVID-19 pandemic and increased demand for refrigeration products to store food and vaccines.

When Petal’s manufacturing partner relayed the news to Taffet about the increased cost, the entrepreneur decided to put the startup on pause and wind down operations. Next, he called a team meeting to tell Petal’s roughly 15 employees about the decision and why he made it.

“We knew that there was no way we’d be able to get Petal manufactured, and even if we were able to, we felt it was a lot more important that manufacturing facilities were focused on keeping the vaccine refrigerated, and not garbage,” Zwahlen said.

Although they put Petal on pause and didn’t totally close the company, winding down operations was more or less the same as shutting down a startup, according to Taffet, who has founded (and shut down) startups in the past.

He acknowledged that while Petal still has funding and its patents, the likelihood of the company’s product being out in the world (at least amidst a pandemic) is slim.

The company returned the money to customers who had pre-ordered the product and explained what happened, paid its partners, and laid off employees, Taffet said.

They did pretty much everything to shut down a company besides closing out the LLC.

The prospect of winding down a company is something many startup founders face. Around 1 in 3 seed-funded startups based in the U.S. between 2011 and 2018 raised post-seed funding, according to Crunchbase data. That means many also fail, but few startup founders spend much time preparing for the not-unlikely prospect of having to unwind their venture.

“The most critical thing that founders don’t think about is the possibility that they’re going to fail,” Zwahlen said. “And they’re not in touch with the reality often. I think a lot of time people will keep pushing forward despite the fact that they shouldn’t be, and it’s hard for people to let go when they’ve invested so much.”

Experts we spoke with agree that failure is part of the startup journey, but say there’s a right way and a wrong way to close an unsuccessful startup.

With that in mind, here’s a checklist to help founders gracefully close down an unsuccessful venture, with the best outcome for customers, employees and investors in mind.

The process of shutting down a company starts long before the company actually shuts down, according to Nick Selman, who founded the coffee e-commerce marketplace Javaya before shutting down the company in 2019.

Founders should be proactive about keeping a...

Read the rest of this article at news.crunchbase.com...

Thanks for this article excerpt to Sophia Kunthara on Crunchbase.

Photo by Tim Mossholder on Unsplash