Shankar Ram has been elected Chairperson of the TiE Global Board of Trustees for 2023.

Shankar Ram has been a member of TiE SoCal since its inception. 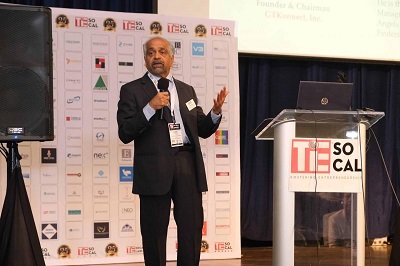 He has been an entrepreneur for over 35 years, starting his first company in 1983 and followed by four other companies, with successful exits for each of them. Shankar is an avid investor, making his first investment in 2001. He is an active member of TiE SoCal Angels, and Guindy Alumni Angels, Santa Clara.

Shankar, TiE Global's new chair said, "I am so honored and humbled to be elected Chair of TiE Global. I assure you that I will serve the position with mindfulness, selflessness, and compassion. As TiE Global is uniquely positioned to help entrepreneurs innovate and create value around the world, I want to help prepare us for an even stronger future. This year, I, along with my fellow Trustees, will place an emphasis on better developing our internal programs to deliver impactful results to our TiE community and building our chapters to widen and strengthen our reach into the entrepreneurial community at large. Thank you for allowing me to serve as your Chair."

The Indus Entrepreneurs (TiE), was founded in 1992 in Silicon Valley by a group of successful entrepreneurs, corporate executives, and senior professionals with roots in the Indus region.

Since 1992. TiE has been supporting entrepreneurs by offering education, mentorship, networking and funding opportunities. The mission of TiE is to foster entrepreneurship globally through the 5 pillars of TiE : mentoring, networking and education, funding and incubation. Dedicated to the virtuous cycle of wealth creation and giving back to the community. TiE’s focus area is to generate enable the next generation of entrepreneurs.

TiE Global is the largest non-profit organization and has amazing networking effect. TiE connects the entire entrepreneurship ecosystem from early stage entrepreneurs, serial entrepreneurs, professionals at leading corporations, venture capital, angel investors, thought leaders among others. The organization emphasizes the spirit of giving in all aspects of their work.

There are currently 15,000 members (including over 3000 charter members or mentors) in 61 chapters across 14 countries. TiE’s mission is to foster entrepreneurship globally through mentoring, networking, and education.