What Does the Future Hold for AI?

An article we liked from Thought Leader Daniel Jeffries:

The Age of Industrialized AI

Where is AI Going Over the Next Two Decades? The Sci-Fi Story that AI Will Destroy All the Jobs Will Slowly Fade as AI Becomes More Deeply Collaborative and Co-Creative. 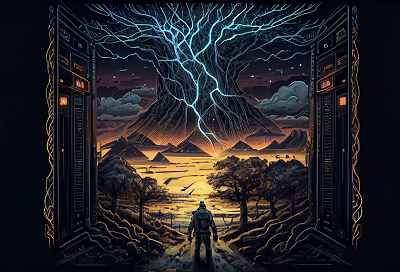 It’s 2033 and you're a top notch concept artist in London building a game with 100 other people.

The game looks incredible. It's powered by Unreal Engine 9 and it's capable of photo-realistic graphics in real time on the PlayStation 7 and near perfect physics. It's got a character AI that can talk with anyone in an open ended way and still stay within the plot guidelines to keep players hunting down magical rubies and the divine sword of radiance.

Even with a 5000 folks you probably couldn't do it back in 2023. That's because it's almost completely open ended, with real time procedural storytelling that creates nearly infinite side missions, personalized music that matches the listener's tastes, and players control it with hand gestures and voice commands. The controller is gone.

AI helped write the code for UE9 game engine, helping Unreal programmers do four releases in ten years, instead of a single release every decade. AI refined much of the original game engine code and made it smaller and more compact, while auto-documenting it in rich detail. AI also helped design the Playstation 7. Chips design models crafted the best layout of the transistors on the neural engine and graphics chip inside the PlayStation. But where AI really accelerated the game development process was in design and asset creation workflows.

As the lead artist, you've already created a number of sketches with a unique style for the game, a cross between photo-realism and a classic look from the golden age of anime sci-fi. The executive creative director and the environment designer signed off on it as the official look of the game. You fed the style to the fine tuner and the AI model can now rapidly craft assets that share that look and feel.

Art isn't dead. It's become co-collaborative. Nothing can replace the human artistic spirit but it now works hand in hand with state of the art generative AI in a deeply co-creative effort.

Now you can move much faster. You quickly paint an under sketch of a battle robot for the game plus a bunch of variants that you were dreaming about last night. You feed it into your artist's workflow and talk to it and tell it you want to see 100 iterations in 20 different variations. It pops them out in a few seconds and you swipe through them.

The natural language and logic model baked into the app understands what you want and does it instantly.

Two seconds later the high rez iterations are ready. The 27th one looks promising so you snatch it out of the workflow and open Concept Painter and quickly add some flourishes: a different face mask that the generative engine didn't quite get right; a new wrist rocket. You erase the laser shoulder cannon and replace it with an energy rifle and then you feed it back to the engine.

It pops out 50 more versions and you pick the 7th because it's nearly perfect and you just need to fix a few things. You rapidly shift it to match the style of the game assets with another step in the AI pipeline and then you check it for artifacts. You fix a few problems but now it's good to go, so you send it off to the automatic 3D transform.

It pops out into the 3D artist's workflow, fully formed just a few minutes later. The 3D artist, working from Chiang Mai, Thailand, has to fix a few mangled fingers and some clothing bits that don't flow right and then it's ready to go. He kicks it off to the story writer working out of Poland. 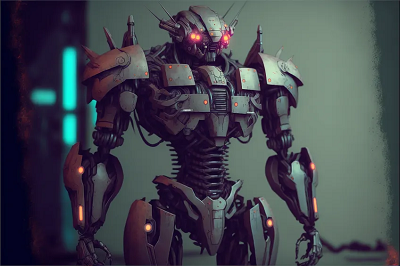 Seeing the new character gets her inspired. She quickly knocks out a story outline in meta-story language and feeds it to her story iterator. It generates 50 completed versions of the story in a few seconds. She starts reading. The first three are crap but the fourth one catches her and she finds herself hooked to the end. It's good but it needs a little work with one of the sub-characters so she rewrites the middle and weaves in a love story with that character and then feeds it back to the engine for clean up. The new draft comes back and it reads well so she fires it off to the animator in New York City.

He pulls up the draft and the character and tells the engine to start animating the scene. In five minutes he's got story stills for the major scenes in the story and branching possibilities for character actions the player might take. Most of them are good but the third scene is off, so he does some manual tweaking and then asks the engine to iterate again. This time they come back good and he sends it all off the engine to complete the animations and connective tissue linking the scenes.

Welcome to the Age of Industrialized AI.

To see how we got here, we just have to roll the clock back to 2023 to see how it all started.

The great acceleration of AI started with a collapse.

It was 2023 and we saw a big collapse and consolidation of MLOps companies.

It happened because in the last decade Big Tech yanked AI out of the labs and universities and into the real world. By 2010 they were already putting AI into production but to do it they had to build all their infrastructure from scratch. It's one thing to build a model at a University and write a paper but it's another thing altogether to scale it, optimize it and served it out to millions or billions of users.

The engineers writing that AI infrastructure for Big Tech saw an opportunity. They figured everyone would want to build models. So they left and started their own companies to bring pipelines, distribute training engines, and experiment tracking to the masses, infused with a surge of capital during the go-go "everything" boom days. Those newly minted MLOps masters all made the same bet. They figured it wouldn't be long before every company in the world had a small army of ML engineers, cranking out models.

There was just one problem. It didn't happen.

Most of those companies struggled to find customers while barely keeping their heads above water.

They forgot one thing.

Building some XGBoost models or doing some churn prediction is within reach of most teams but it's another thing altogether to build out large language models like Chinchilla or GPT4 or generative diffusion models like Midjourney v4 or Stable Diffusion. It takes massive amounts of data that can't be labeled with brute force, millions of dollars worth of GPU compute, and a lot of talented and expensive people.

In short, it's just too complicated and too expensive for the average company to build out a supercomputer, hire an ML team, a data team, an MLOps team and build a top of the line model.

Most companies will never train advanced AI from scratch.

The vast majority of companies won't even interact with AI at a low level. That's like writing in Assembler, essential for a small subset of tasks, but way too complicated for most projects. Companies just don't have the time, money and people power to ingest billions of files, label them, do experiments, train a model, deploy it, optimize it and scale it.

And that means 2023 marks a major turning point for MLOps companies. The smart and well designed platforms will survive and adapt to the new reality but many of them just won't make it. Macroeconomics are scary at the moment with sky high inflation, a property bust in China, an energy crisis, an invasion in the Ukraine putting serious pressure on food prices and more.

We'll see a lot of mergers, acquisitions, fire-sales and flame-outs this year. That's all right because it's accelerating the rise of the canonical stack of AI. People will start to converge on a small subset of the best tools.

Call it the Great Ravine. Many companies will not cross the chasm. But the ones that do will form the bedrock of future AI applications and a new stack that most AI driven businesses use by default.

Think of it as the LAMP stack for AI.

Once we had the LAMP stack, we got Wordpress and once we got Wordpress, we got high level drag and drop editors like Divi that make it easy for anyone to design a cool looking website.

In other words, we moved up the stack to a higher level of abstraction. I'm a so so web site designer but I've got a good art direction sense and that lets me drag and drop websites even though I can't write a line of CSS. Each layer of abstraction is all about accessibility.

The history of technology is abstracting up the stack. Assembler leads to C, which leads to C++, which leads to Python and Go and on and on. Abstract away more of the low level functions and you've got more people who can play in the sandbox. It's a lot easier to learn to write Python than machine code.

The same thing is happening now in AI and it's happening a lot faster than anyone expected. We're already moving up the stack to fine tuning models, chaining them together and stacking them into wonderful workflows and building apps around them.

A lot of those companies and open source tools won't last. But the bloodletting will just make the winners stronger. The lower level tools will mature and morph. They'll stop trying to serve every use case on the planet from basic Bayesian analysis to self-driving cars and they'll focus on...

Read the rest of this article at danieljeffries.substack.com...

Thanks for this article excerpt and its graphics to Daniel Jeffries.